Click on the blue box that says “NEXT” (on the right) to read more.

Searching
Searching is a vital part of planning many reunions. If yours is a class or military group and you’ve not had any reunions, searching may be a focus of all your planning. You’ll always be looking for some missing members. If yours is a family reunion and you’re a genealogist, you’ll always be searching, but most likely for ancestors. Some families search for individuals and branches they’ve lost contact with. These are ideas for searching and some interesting examples of success. 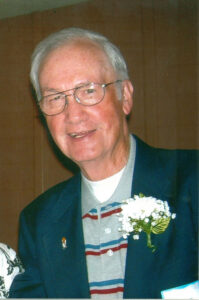 The late Bill Williams, a great friend of reunions.

Most every reunion notice includes the following. “The Class of 19–, Anytown, USA, is looking for missing members, if you can help, please call ______.”

This notice will not, however, appear for the 50-year reunion of the June 1948 Class of Warren G. Harding High in Warren, Ohio. There were 368 graduates of which 71 have died and addresses for 17 were missing from the 45th year reunion.

Almost 50 years ago, we graduated from the only public high school in Warren, population 52,000. Some stayed home, most scattered in many directions.

The 1958 reunion featured dinner at a local restaurant with a greater than expected response. About 40% of the class attended. Many were married and raising young children. In 1968 the same committee cranked up again to plan, correspond and host another successful reunion.

It was decided then to have reunions every fifth June to enable those planning vacations to work around graduations, weddings and other plans. A resort facility (motel, golf course and large ballroom) has been the meeting place for the past five reunions. It has been an ideal place for fellowship, relaxing, dining and dancing. Many members extend the visit several extra days.

The committee remains constant. Many committee functions have had the same person performing the task each time. Each reunion has been headed by different committee co-chairs to give and get new ideas.

Vital – a networking information base
One of the most important tasks – updating current addresses – has been vested in co-author, Jerry from the beginning. Each and every name and address is verified starting about a year before the reunion. Our local library stocks a good collection of phone and city directories from around the country. We tapped our existing network of class members all around the country for people who moved. We made phone calls and wrote letters to locate the “missing.” Even then, some matches could not be made. A master reference list (name, address, family data and source of verification) is maintained.

Keep everyone informed
Even in “off” years, the committee needs no excuses to get together. As the reunion draws closer, planned meetings increase. With 1998 right around the corner, periodic meetings were held in 1996 to confirm dates, place, general framework for daily activities and similar events. The following summer, a “heads up” post card is mailed to lock in calendar dates and validate address records. A review of our mailing list found at least ten moves, many zip code changes and even several first name changes. Five months later, a letter includes forms for reservations, golf times and special needs.

Internet power
I am class vice president and live 500 miles away in Hampton, Virginia, so I volunteered to help with search efforts. Building on the solid database provided by the hometown committee, I added powerful computer tools and the Internet to search such things as nationwide white page telephone listings, genealogical records, local/state/federal agency addresses and the Social Security Death Index. Time and energy are saved as most searches were done in the comfort of my own home.

At our 45th reunion in 1993, there were 17 of 368 class members unaccounted for. The committee, using many contacts, techniques and network feedback, was able to find seven. As reference points we were using spouse’s names, previous addresses, whether the person is divorced, widowed or served in the military. These all gave good focus to the computer search. The last “missing” member was found in January 1997.

Computer matches
We had a current address for one missing individual in the early 1990s. He moved but stayed in the same state. A white page phone search found him. A mailing to another class member was returned as undeliverable. A typo was discovered and corrected and the person was found in the city of last known address.

A female classmate was widowed and started using her initials instead of her first name so her last known residence was current.

One individual was John in the class yearbook but a check of the official graduation program showed a different and unusual first name. A search of phone listings spotted him as the only one in the US with that combination. That same person provided a lead to another “lost” classmate. It pays to ask those you find if they have any leads to the others.

Another was found through his brother whose address was located by calling a golf course to ask if greenskeepers have a national organization. They do.

The spouse’s name of a missing female was provided by the hometown committee. Eight possible matches all around the country were identified. A letter was sent to each and the right one forwarded my letter to his former wife from whom he was divorced. She responded.

The remaining three searches were not able to pick the low lying fruit from the tree of knowledge. Knowing whether or not a member had been in the military proved useful. A letter sent to the Office of Veterans Affairs about a former Army enlistee was requested to be forwarded to his last known address. He got my letter and called from Golden, Colorado.

Another female classmate did not appear in any of the search documents. She had a rather unusual first name, which was a feminine version of a male first name. A search of the Social Security Death Index found that male first name, who could have been her father. His death certificate and obituary were obtained. A cousin, who still lived in the same Texas town over three decades ago was found through white page searches. He provided a three year old address. A certified letter was validated by the return card.

The last of our missing classmates had a common first and last name – over 80 same names found in phone directories. These were given to the hometown committee who made about 60 phone calls. We knew he served in the US Navy but efforts through the Navy Locator and the Office of Veterans Affairs could not connect. His name was posted on many Internet Missing Person categories without a match. I sent several letters to Social Security Offices with the request that they forward my letter to his last known address, if it was in their files. The explanation of all my efforts to no avail found someone willing to help. He got my letter and called from Malibu, California. He had an unlisted phone for over 10 years.

BINGO! – 368 graduates accounted for! Our goal was achieved.
Searching lessons learned
*Start early. Establish a standing committee to develop contacts, research and build rapport with the class.
*The committee needs continuity. If you start over every five years, you lose too much.
*Develop accurate and complete data, a master reference file to track moves, deaths, and other pertinent information. Your graduation program included each graduate’s full name.
*Don’t be afraid of new technology. Harness it. Other class members who are on-line are an invaluable support network and can serve as a sounding board. The more involved, the better.
*Be persistent. You need back up plans when dead-ends keep showing up. Keep plugging onward.

Conclusion
Any reunion plan can incorporate these tangible search tips. When you can account for all, or most of your class, you add leverage to insure a great turnout, even by some who might not ordinarily attend.

Every class seems to have its own character. Much to the chagrin of faculty back in 1948, our class motto was “we have survived.” Little could any of us perceive what it would mean to us as we approached the 50th anniversary of our high school graduation.

About the authors
Joanne (Jerry) Gerald Wareham is the hometown reunion records manager. As a homemaker, she spent 20 years raising three children before taking a parttime bank job. Now retired, she volunteers extensively at her church, watches her young grandson and continues her 50-year stint coordinating reunion records and correspondence.

Bill Williams served as the NASA Langley Research Center’s Personnel Director during his 30 year NASA career. Since retiring in 1988, he coordinates the Membership Network, Virginia Peninsula Total Quality Institute and is president of Asonic Internet, Inc. in Hampton, Virginia.

Update
We first met Bill Williams in an autumn 1997 article after he’d found everyone in his class of 368 members for the Warren G. Harding High School, Warren, Ohio, 50-year reunion. At least ten members came to their first reunion. One flew from Hawaii and said he had not come Stateside for 50 years. Their goal was to have 50% of their 290 members still living to attend for the 50 year reunion; 168 attended one or both nights to reach 58%.

Scroll to top and click on the blue box that says “NEXT” (on the right) to read more.