The Saigon MaC, is predominantly Marines who served as Marine Security Guards (MSGs) at the American Embassy in Saigon, Republic of Vietnam. MSGs are an integral part of our overseas diplomatic missions and provide a critical element of security in carrying forward US Foreign Policy. Reunions celebrate the long association of the Marine Corps with the Department of State.

Membership includes civilians with the US Mission in Saigon as well as diplomatic, foreign assistance and informational personnel, from other branches of the military. In fact, any persons in any way affiliated with our Embassy and related US Government operations in Saigon are welcome to attend reunions.

There are members who served as far back as the 1950s and continuing to the fall of Saigon and the end of the war. In fact, one member (unable to attend this year) was the last Marine on the last evacuation helicopter off the roof of the embassy, literally the last official American out of Vietnam at the end of the war. This year’s reunion in Branson, Missouri, included twenty-five former Marine Security Guards, six from the Foreign Service/State Department and three US Navy.

Without question the highlight of the Branson reunion was the day spent at the College of the Ozarks. The quality of program put together by Mollie Crawford and her staff was exceptional and inspirational – from the initial campus tour through lunch, a visit to the Ralph Foster Museum and closing out with ice cream. Many in our group have vowed to return, just for the ice-cream.  For our age demographic, trying to navigate the museum late in the day was perhaps a bit much but feedback was positive for every element of the tour.  Likewise the Veteran’s Memorial Museum was sobering and appreciated by all. Our bus tour of Branson and surrounding area was a useful orientation and allowed us to do what we do best–just sit and relax.

On their own time, reunion members spread out and attended numerous shows. Over the course of our four-day reunion, well over half attended the dinner show on the Showboat Branson Belle.

The help and support we received from Julie Peters, Leisure Group Sales Manager at Branson/Lakes Area Chamber of Commerce & CVB, during the planning stage was critical and the single most important element in bringing this reunion to fruition. She laid the foundation for our advance team and truly made it possible for us to have a productive planning visit. Overall, the reunion was a wonderful event and I greatly appreciate the assistance in making that happen. 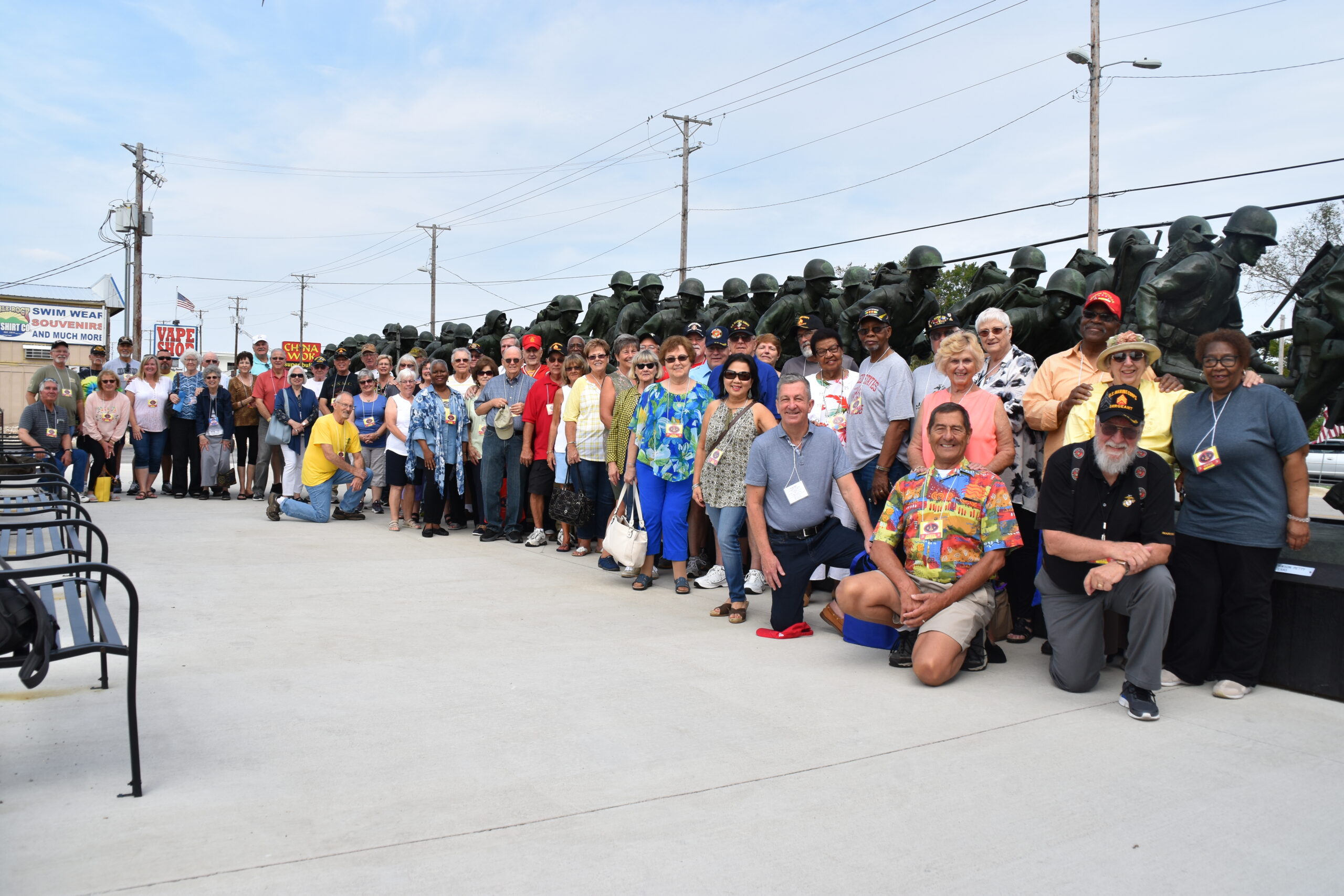 Saigon MaC Reunion group just outside the Veterans Memorial Museum on the Branson Strip at “Storming the Beach,” a sculpture commemorating the Western Allies during World War II launching the largest amphibious invasion in history, on the beaches of Normandy, France, on June 6, 1944. The statue was sculpted from real life pictures that represent soldiers from each state. Fred Hoppe Jr sculpted this in honor of his dad, a World War II veteran who survived two beach landings. He is the first soldier depicted at the front of the statue.