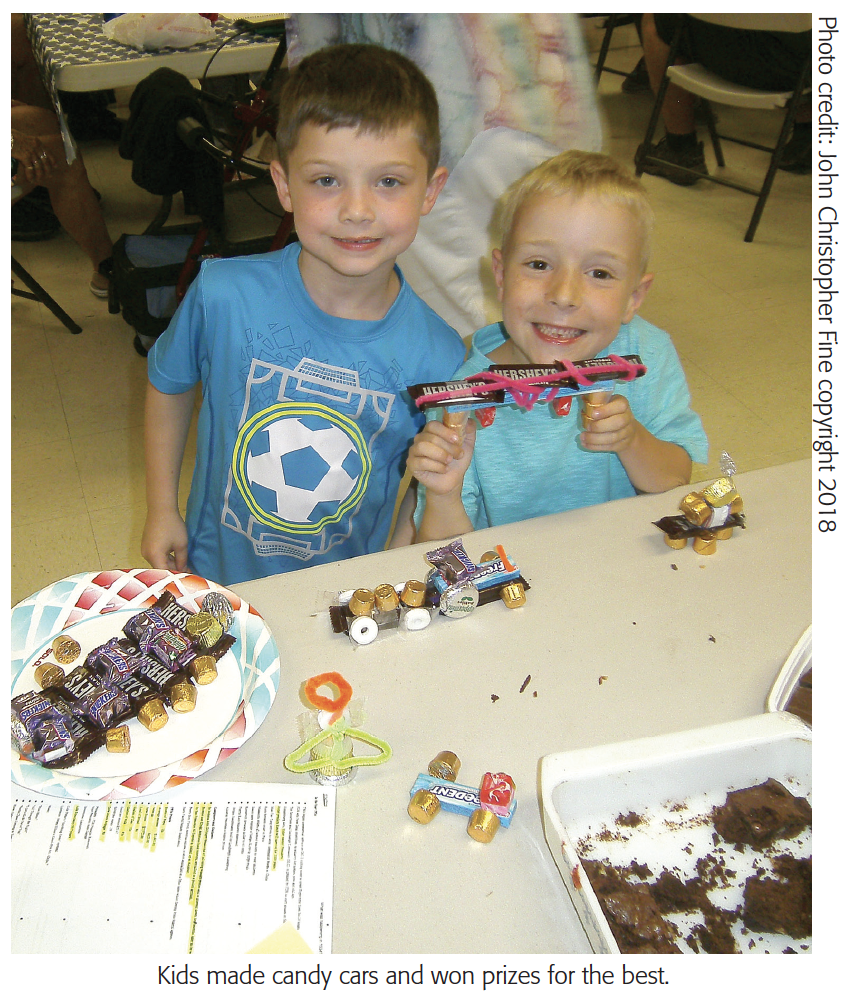 “Who is the oldest married couple?” Sue Moose White had a list of questions. She posed them in the recreation hall of the Harney, Maryland, Volunteer Fire Company to about a hundred members of her clan. The oldest was 94 year old Betty Boose from York, Pennsylvania. The youngest six month old Anastasia Baccus. It was difficult to keep all the relationships through marriage connected to the line of the 84th consecutive Moose-Kittinger Family gathering. Never missing a year since 1934.

The oldest married couple was Gene and Linda Moose, Sue’s parents. Her next quest was to find the biggest muscle. She tested biceps of men and women asking: “Do you think I feel men’s muscles for my own pleasure?”

There was fun for all ages. Kids whacked at a piñata full of candy held on a pole between two stout shoulders. The moose piñata, created by Sue, was so tough that only hitting in a free-for-all, did the ears and antlers get knocked cock-eyed eventually giving way to the candy.

Most participants were not even born in 1934. Three had been at the very first family reunion as children. One, five years old at the time, said she remembered it. Sue pointed out factoids from 1934 like gasoline priced at 10c a gallon, the Dow Jones at 0.98, and a new car cost $625.

“Do you remember Vicks VapoRub?” Sue intoned into the microphone. Her voice echoed off bare walls of the fire hall. Invented in 1934, her father prescribed the pungent unguent for preventing bulls interfering at sexy cattle shows by rubbing it on their noses. Another aside of this extended family that has kept its roots firm despite years and distance.

Travel to the reunion

The farthest traveler to the reunion came from St. Louis, Missouri. The closest from across the street. Many fascinating stories were told about unions and marriage. Betty Boose married Leroy Moose. They met at a defense factory in York, Pennsylvania, during World War II. “I helped make the big guns,” Betty said. While the longest married couple received a gift bag containing a small bottle of Scope mouthwash, Betty Boose as oldest received a bottle of booze, or at least a reasonable facsimile as far as the brown bottle looked.

Food was in abundance. Families brought potluck while fried chicken and ham were supplied communally. The vittles were good, more so homemade desserts that vied for prizes judged, not so impartially, by tasters. A double chocolate cake won as did cinnamon cake and brownies. From that point on the tasters seemed rather subdued as they regained their chairs, looking satisfied without further appetite.

Rhianna Moose White created a festive moment when she brought her blue heeler puppy into the hall. The family genealogy now includes a happy puppy that almost stole the show from the kids held at bay whacking at the piñata.

Family holds special meaning in this rural part of Pennsylvania snuggled into the Maryland countryside near Gettysburg. Identification with the place and its people create a bond of friendship, that has lasted 84 years of consecutive gathering together.

“That was my room right there on the right,” Gene Moose said. He stood in the fire hall doorway pointing to a two story frame house across the road. That was where he was born and grew up. Only steps from where he and his wife Linda now stood reminiscing with family while their granddaughter showed off her new puppy.