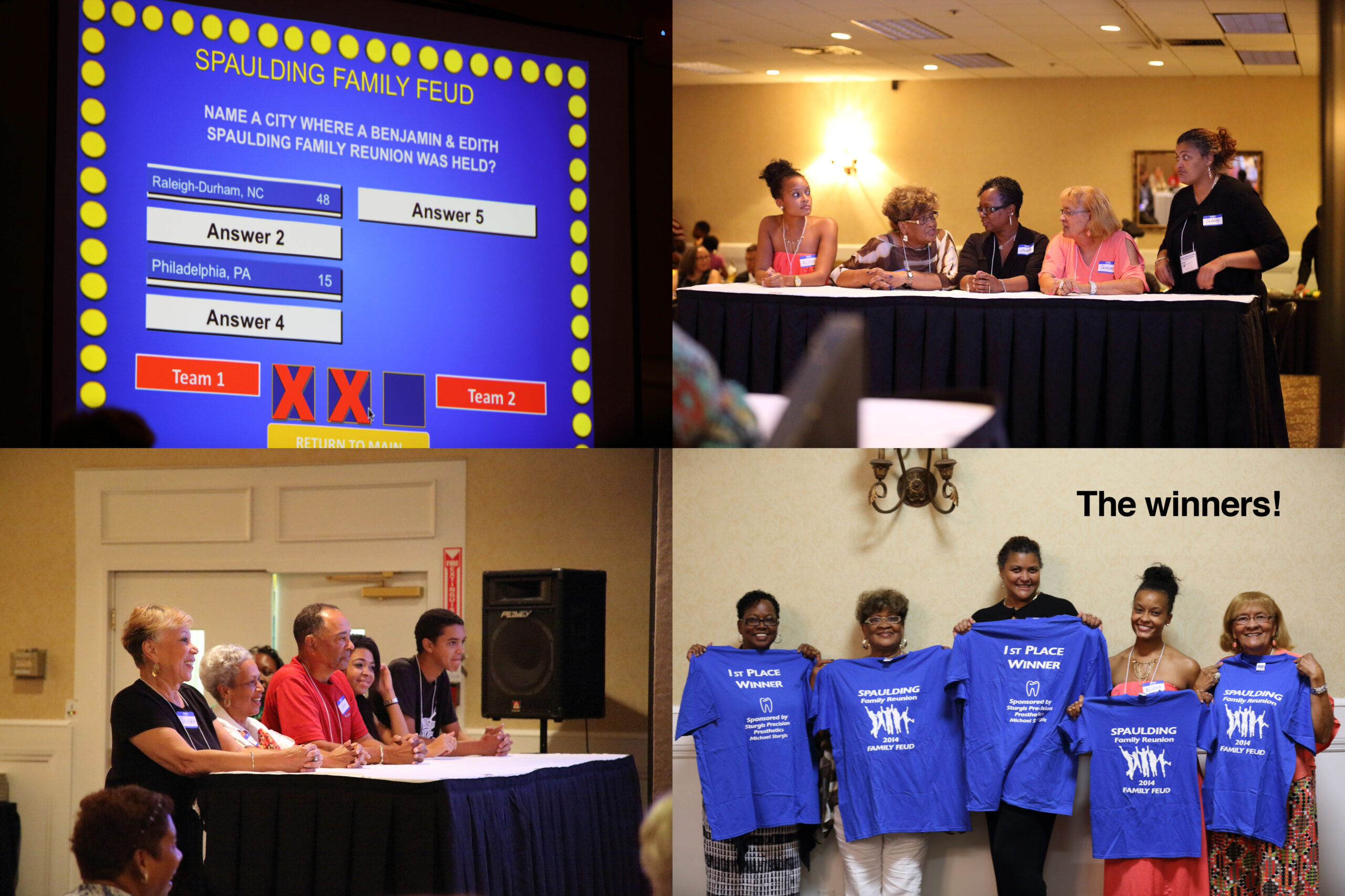 The Arce Family Reunion’s Family Feud engaged branches as teams to battle for the championship! Competition is stiff for bragging rights ‘til the next reunion.

Oliver Peters, Jr, and his wife, Linda, of Leesburg, Virginia, looking for “a goofy participation game” came up with Peters Jeopardy in 2009. They realized they have so many goofy “sayings” that they keep using over and over again each and every reunion, that they thought it would be fun to work them into a trivia game. Thus, “Peters Jeopardy.”

Oliver and Linda work out categories and questions for each years game. “Double” Jeopardy, “Final” Jeopardy and “Anniversary Edition” Jeopardy (2nd, 3rd & 4th games) were names added to distinguish one year from another. The 2013 edition, we’ll have a title geared to the fact that this is their 40th reunion, focused on the early years of their reunions.

One category is always last years reunion; questions related to what went on last year. There is a total of 50 questions; 10-15 questions about last years reunion, then 40 more random questions. Then they work on category names to plug questions into. The “final” Jeopardy question is usually a toughie. Something obscure and hard to remember.

Answers to all the questions can be found in either reunion scrapbooks (they have four books filled with pictures, etc), or from their online web postings. If there is ever a challenge about an answer, Peters can point to his source. Actually, he says, no one challenges him anymore, because they know, he knows! Many of the questions come out of their yearly “Reunion Summary,” a one to two page “snyposis” of each year’s goings-on.

In anticipation of the popular game and to promote the upcoming reunion, Oliver makes teaser “commercials.” Teasers show the jeopardy board, catagories, and “prizes” for winners and losers. Teasers are posted on their web site.

For their 40th reunion, the Peters Family Reunion is having t-shirts with the backs adorned with several of their goofy Jeopardy “sayings.”

The Wilson Family has a bi-annual tradition of encouraging its family members to participate in homemade, online trivia. 2012’s theme is Wilson Family History & Black History. Click on the image below to view a PDF version of the trivia in its entirety.

Watch out, Regis!
Shamele C. Jordon, Linden Wold, New Jersey, reports about a new game that her family will play, “Who Wants to be a Toomernaire” based on the popular game show.
Questions about family are in the following categories: Henry and Bertha – whom they all have in common; the 1st kids – Henry and Bertha’s 16 children; Toomer Baby Boomers Henry and Bertha’s grand and great grandkids; Berlin, New Jersey, the town where they grew up starting in 1926; and Toomer Reunions – reunion history.

Question: Who was the first H & B descendant to receive a college degree?
Answer: Elijah Reid Jr.

Question: Which Toomer was responsible for the move from Philadelphia to New Jersey because he was hit by the trolley car?
Answer: Clarence

The Toomers are also into special awards. The Recognition Award is given for service to Toomer Family Reunions either by working on the planning committee or in the background. Last year’s award went to Susan Toomer Clayton who doesn’t like meetings but at the reunion works harder than anyone. Winners are chosen by the planning committee.

Awards include the following:
1. Youngest Toomer baby in attendance
2. Newest wed Toomer couple in attendance
3. Toomer Service Award
4. Descendants Award for the person with the most descendants in attendance
5. Dance Contest Award 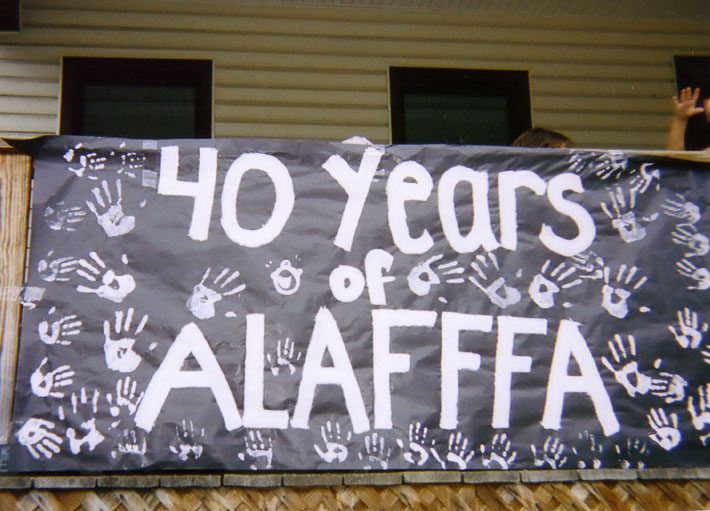 The younger members of the ALAFFFA Family Reunion enjoyed a game modeled after the CBS show The Amazing Race. They divided in two teams and were assigned tasks centered on six continents. Instead of a $1 million prize, the winning team received 100 Grand (candy bars).

The first task was to take pictures. The list included a team picture, a person over 60, a person under six, a grandma and grandchild, and other designated photos.

In “Antarctica” there was the “Penguin Ice Race.” Four team members dressed as penguins in top hats and knees tied together to ensure proper waddle. A fifth team member was the ice catcher with a bucket. Each penguin carried ice to the bucket using a spoon in his/her “beak.” The team with the best time captured the continent.

In “Europe” teams went on a “Backpack Scavenger Hunt” to collect designated ALAFFFA items. The team with the most objects collected in the best time took the continent.

The “North America Challenge” was a “Las Vegas Poker Walk.” One member from each team walked five times around the house collecting cards during each lap. The person with the best poker hand at the end of the race captured the continent for his/her team. 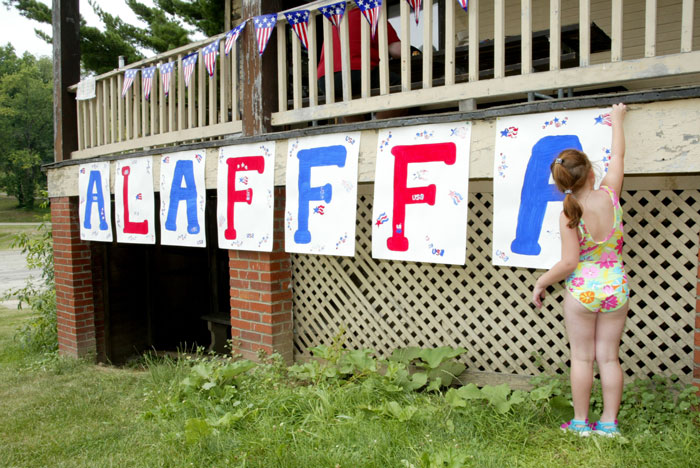 The final step was the “South American Rainforest Trail Mix Challenge.” Each team prepared a bowl of trail mix from designated ingredients and placed one cup on a plate. Next, 10 peanuts in shells were added and one team member had to pick up all the peanuts with his/her mouth and transfer them to a second clean plate. The team with the quickest time captured the continent.

Each team won three continents, so the contest was a draw, and both teams shared the prizes.

A softball game is one of the longest-running ALAFFFA traditions. Three generations participate in this friendly contest. Who won? No one is certain, but it is a great activity for young and old alike.

We left with warm memories of another great ALAFFFA reunion, and an enthusiastic chorus of, “See you next year!”

About the author
Lisa A. Alzo, M.F.A. is a freelance writer, instructor and lecturer. She is the author of nine books and hundreds of magazine articles, and is an internationally known speaker on genealogy/family history. Lisa serves as the “ALAFFFA” family historian and can be contacted through her website, lisaalzo.com.

Learn how to make your own Family Feud game for your reunion! Instructions from wikihow.

In E! True Toomerwood Story at the Toomer Family Reunion, the best family story wins. Each person has up to three minutes to tell a g-rated family story, based on a chosen category. Family members then vote on the best stories. The top three or five will go on to the finals, taking place on Reunion Saturday. Each finalist must tell a new story. Following are sample categories: Family Table, Reunions, School, Trips, Big Aunt Ida, Us Against Them, Blueberry Field, Whippins, Brothers & Sisters, New Baby, Christmas, Family, Gatherings, Church and Holidays.

These are other reunion games the Toomers play:

Silent Auction – We have had this prize winner for more than a few reunions. There is a table with auction items. In front of each item is a box. Purchase tickets at $1 each. Place ticket(s) in the box, in front of the item you want to bid on. Winners are drawn from the box and announced during the Saturday program.
Guess Your African Ancestry was an opportunity to guess results of a DNA test — before results were in — and win a prize.
Get To Know Your Family. At registration, forms for this game are handed out. They list family questions. Players had to find family members who match the answers.

On Saturday afternoon our creative younger generation customized an Amazing Race competition, somewhat like the TV show. Teams of five or six had to assemble a puzzle to get their initial instructions. Then, they had to go to local attractions and family historical spots around town and report back at various points. 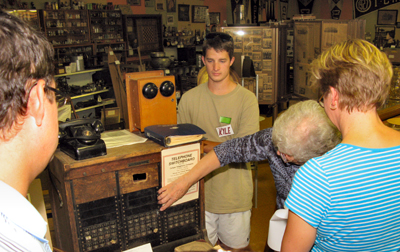 One of the stops on the Amazing Race was to see an old switchboard originally owned by ancestors George and Frances (Keller) Malsam, now displayed in Wakeeney, Kansas, History Museum.

Tasks celebrated family history by asking trivia questions about common ancestors, the late George and Frances (Keller) Malsam. The couple owned the local telephone company and their old switchboard is now displayed in Wakeeney’s History Museum. Teams were required to find the old switchboard and take a trivia test from family members about where George and Frances were born, the church they attended, their middle names, their hobbies, etc.

Other tasks included taking a picture of a terracing machine (invented and patented by George and Frances’ son), making a rub-off picture from a Veteran’s Memorial plaque in the cemetery and snapping a picture of an old fighter airplane on display.

Each team was given money to buy food at a local snack shop and deliver it to the food bank at the police department. The teams also had to visit the fair grounds to find out about contest winners.

One of their more odious tasks was eating sardines. One of our grandkids likes sardines and proudly helped his team surge ahead by eating all the sardines.

About the author
Margaret Malsam, Denver, Colorado, is the author of two books and many magazine articles. She loves connecting with friends and family at reunions and has written about several Malsam reunions for Reunions Magazine. 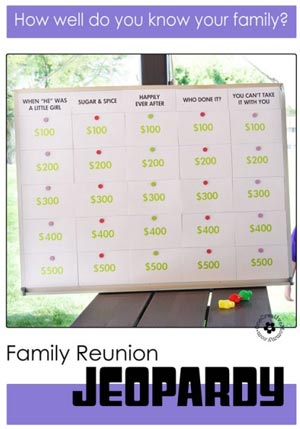