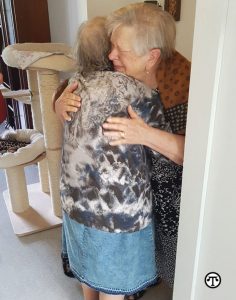 Decades after they were separated by war, two sisters were reunited by the Red Cross’ Restoring Family Links program.

Armed conflict, international disasters and migration can mean tragic separation for too many families. But there is hope—and you can play a role.

Two sisters experienced this humanitarian effort firsthand. As little girls, Tamara and Lidia were caught up in the Siege of Leningrad—one of the longest and most destructive chapters of World War II.

The girls suffered through the death of their mother to starvation and illness, and the loss of their father to German labor camps. They were placed in separate sections of a local orphanage and adopted by different families. Tamara eventually settled in California, Lidia in Finland—never losing hope that she would one day be connected with her beloved sister.

After 72 years of separation, Tamara got a call from the Red Cross Restoring Family Links (RFL) program, telling her Lidia was alive and well-and looking for her. Tamara traveled to Finland and they finally reunited.

“It hurts me that for the longest time I tried to keep my mum in my memory and same thing with my sister,” says Tamara, explaining that memories fade over time.

But hope, luck, and the services of the Red Cross enabled Tamara to finally reunite with her sister. “It is such good work,” she says.

Separated by a Loved One?

If you have been separated by an international crisis, you can start a search by:

There are three other requirements:

The Red Cross depends on volunteers and the generosity of the American public to perform its mission. You can volunteer your time helping reconnect loved ones.

For information, visit redcross.org or cruzrojaamericana.org.