Survey finds structure and planning are keys to happy family reunions
by Laurence A. Basirico, PhD

What could be better than spending a day with your closest family members a few times a year with nothing to do except relax and reminisce? Well, how about 4 days or more of planned activities with your extended family every 10 years or so? This survey sponsored by Reunions magazine and Elon University, Elon, North Carolina, found that family members are more satisfied when their reunions are structured, organized, well planned, larger, longer-lasting and less frequent. Of all these characteristics though, the real keys to success are structure, organization and planning.

How the research began

The survey that yielded these conclusions is part of an ongoing research project about family reunions that I began about five years ago. My interest in family reunions is both personal and professional. I have attended and observed my own family’s reunions -– parents, siblings, spouses and children -– for nearly twenty years. My initial research was based on observations of and personal reflections about my family’s reunions, discussions with about 50 others about their family reunions, and my sociological knowledge about human interaction. Hoping to broaden my understanding, I developed a survey for Reunions magazine and sent it to a random sample of 2,000 reunion organizers/readers.

What the research is about

The main purpose of my research is to examine relationships at family reunions. Simply, how well do family members get along with each other and enjoy their reunions? In addition to answering basic questions about reunion facts (who, where, how often, how they are organized), respondents were asked how personally satisfied they were at the end of their last reunion, how satisfied they thought other family members were, how well family members got along with each other, and questions that comprised a “relationship index.” I developed the relationship index to get a better sense of how well relationships work at family reunions. The index included eight questions about things such as decision-making at the reunion, tolerance and acceptance of one another’s behaviors and lifestyles, and the extent to which any serious conflicts occurred. Besides exploring quality of relationships, I wanted to look at relationships that worked best and find out what happened at those reunions so we could learn from them.

How people felt about their most recent reunion

The survey found that people are generally happy with how their reunions work out. Seventy-three percent said most family members were very satisfied at the end of the reunion, 69% said they were personally very satisfied, and 72% felt family members got along extremely well. That’s very encouraging news, but it still leaves about 30% of families who could learn a thing or two to have a better time with each other at their reunions.

For the “relationship index,” respondents were asked to indicate how much they agreed or disagreed with eight statements about the way people behaved toward one another. Each statement was framed as a positive relationship. These included statements such as “There was respect for one another’s rules for daily living,”

“There was tolerance of each other’s views on controversial issues,” “People avoided engaging in objectionable or offensive behavior” and five others. While most respondents agreed with each of the statements in the index, only 17% to 37% strongly agreed with the eight statements. That leaves more than 60% of respondents indicating there is room for improvement. One respondent wrote, “I look forward to our reunion all year. We love each other dearly and everyone gets along great, but there are those occasional tense moments.”

The evidence is clear. People generally have a good time at their reunions and get along well with each other. Yet the survey shows there is a substantial percentage who say things aren’t the best they could be. What, then, can be done to make your good time even better? What’s going on at the most successful reunions that make them work so well, and what can we learn from them so every reunion works as well?

What leads to the best relationships at family reunions?

The highest levels of satisfaction were reported by families who have reunions:

In addition, 97% of those who attended a reunion of their extended family (grandparents, aunts, uncles, cousins) said family members got along extremely well as compared with 82% of those who attended reunions of their family of origin only (parents and siblings). It appears that people seem to fare better at the larger reunions rather than when they attend with the people to whom they may be the closest emotionally or with whom they have the most contact.

But before you decide to hold infrequent, large, long-lasting reunions with your extended family, thinking that these things alone are the keys to success, consider this vitally important survey result: Reunions that are held less frequently, are larger, last longer, and are attended by extended families are the very ones that are more structured and well planned! In other words, if you take away the structure, organization and planning, the other characteristics have no real effect on the outcome. The reason those reunions work better is because they are more organized and planned.

One respondent who boasted about good times at her reunion of over 100 cousins spanning three generations wrote, “We plan and plan and plan and plan. Then we plan some more. We only see each other every few years and I can’t imagine getting together with this many people without having some sort of schedule. But it’s worth it.”

Furthermore, the survey found the greater the level of “clear and organized decision making” (certainly a by-product of good organization and planning) at the reunion, the higher the level of family member and respondent satisfaction, and the higher number reporting that family members got along well with each other. As one interviewee, whose family tends to have more informal reunions, told me, “No one can make up their mind about anything. What to do, when to eat … what to eat. I wish someone would just take charge.” While no one is suggesting they want their reunion to resemble military boot camp, people like to know how things are being decided and that someone is taking responsibility.

To some, the idea of a highly structured, organized and planned gathering might seem better suited for a business meeting or a summer camp than a family gathering. However, the survey respondents and people I interviewed who had the most successful relationships at their reunions said those reunions were the most planned and organized. And those who said that their reunions lacked any real planning or structure were the ones who spoke most frequently of tense moments and uncomfortable situations.

Ironically, reunion success does not always have to do with how close a family is. “All you need is love” may be a good slogan for the long term, but as far as family reunions go, love is not enough. Structure, organization and planning are the key ingredients to successful reunion relationships among family members.

Who answered the survey?

568 (28% of those to whom it was sent) people from across the United States answered the survey. Here is a little bit about who they are:

About the author
Larry Basirico is a sociology professor at Elon University, Elon, North Carolina. He has been doing research about relationships at family reunions for over five years. He has presented his work at national conferences and the National Social Science Review, and is currently working on a book. 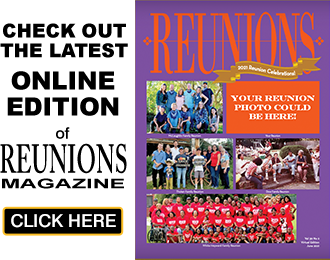