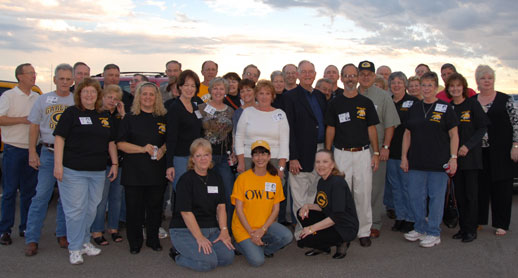 Members of the Drury (Massachusetts) High School Class of 1955 celebrated their 50th class reunion and donated $2,000 to the school to cover the cost of purchasing a multimedia liquid crystal display projector.

Ten years earlier, the class raised $7,000 at its 40th reunion to purchase what was a state-of-the-art computer system at the time. Optional donations raised money to purchase the projector, and to donate $1,000 to the North Adams Public Library. The class also purchased a brick from the library capital fundraising campaign; the brick will read “Class of 1955.”

Some class members said their children attended the school and some have grandchildren in the system now, so their own families benefit from donations.

From an article by Jennifer Huberdeau in the North Adams Transcript, North Adams, Massachusetts

Russ James met his wife Barbara at South Beloit High School. The couple celebrated their 50th class reunion and 50th wedding anniversary by making a donation to the school where they fell in love.

Russ James saw that the school’s Industrial Arts room lacked equipment, and since he benefited from the hands-on education he received, he couldn’t imagine what skills students were learning without proper equipment. “I’ve used those skills throughout my career.” What James learned at SBHS, specifically in the shop, led him to be a successful business owner.

South Beloit moved into its new high school in 2002 to give the district room to grow in the future. But budget restraints allowed the district to purchase only hand tools and three small power tools for the Industrial Arts program. The district compiled a wish list and made it available to the community.

The couple donated $10,000 to purchase tools and equipment for the shop. With the money, teacher Chris Marshall was able to outfit the shop with a table and band saws, lathes and drill presses, hand tools and a dust collection system.

From an article by Ann Montgomery in the Beloit Daily News, Beloit, Wisconsin

The Ludlow, Kentucky, school system’s first all-class reunion for graduates of Ludlow High School was held to reconnect alumni as well as raise money for an elevator to transport disabled students within the building.

Alumni from as early as 1941 and as far away as California and Florida were expected to attend.

Ludlow high and middle school buildings have five levels, and there is no way for students in wheelchairs to move from level to level within the building. The schools are expecting two such students soon from the elementary school. In addition, elderly relatives will be able to use the elevator when attending graduations.

From an article by Karen Gutierrez in the Cincinnati Enquirer, Cincinnati, Ohio

The Class of 1952 was the first in Wilkes County, Georgia, to complete school through the twelfth grade. The 1952 Fund was established in 2002, at the group’s 50th class reunion. The stated purpose of the scholarship fund is “to aid graduating seniors of Washington High with tuition in college.” The first scholarship will be presented at the 55-year reunion of the class, to be held in 2007.

From an article in the News-Reporter, Washington, Georgia.