The Fleetwood Family Reunion gathers descendants of Charles Fleetwood and Lucinda Morgan of Oklahoma and their 14 children. The first reunion was in Tahlequah, Oklahoma, Capitol of the Cherokee Nation West, where their 7th great-grandparents met at nearby Fort Gibson, Indian Territory, in 1834. Charles Fleetwood was a Dragoon in the Army from Bertie County, North Carolina, on the east coast and Lucinda Morgan was a Cherokee/Catawba immigrant from the hills of western North Carolina. 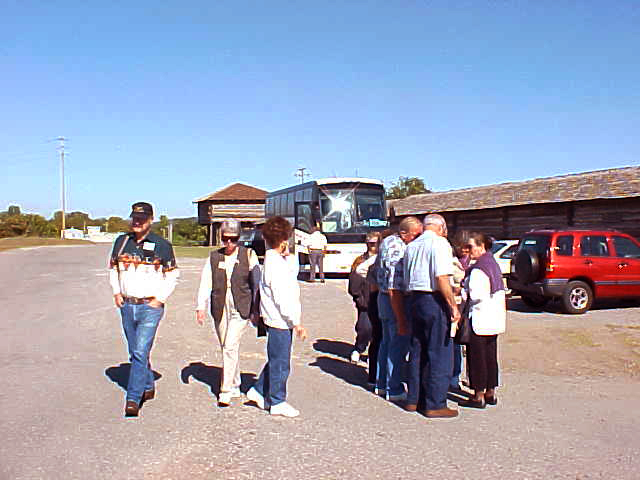 Organization of the reunion

The reunion reserved a travel coach with an intercom and visited several historic sites in Oklahoma’s Delaware District, along with places the family lived, transacted business and are buried. Presentations on the tour included charts, maps, pictures, displays, books, and genealogy material pertaining to family history.

Friday they traveled north into the Delaware District and visited historic sites where policies had impacted their ancestor’s lives. They contemplated Charles’s involvement at the Battle of Cabin Creek historic site. At the Saline Courthouse they imagined ancestors coming to cast their votes in Cherokee Tribal elections. They visited cemeteries where Lucinda and other descendants are buried. That evening they showed a documentary called Last Raid at Cabin Creek.

Saturday, again by coach, they traveled south, first stopping at Fort Gibson State Historic Site, where their ancestors met and married. Lucinda was 16 and Charles was 24. From there the tour stepped out of the Cherokee Nation and 30 years into the future. They went south to the Battle of Honey Springs State Historic Site. Again they imagined Charles’s involvement at another pivotal engagement of the Civil War in Indian Territory and cried that he was an old man in the Union Army, who at this place faced his sons who were Confederates.

Each day the coordinator, Jennifer Sparks, called ahead and made reservations for the party. She chose moderately priced restaurants with which she was familiar and served good food. Everyone was satisfied.

Reported by Jennifer Sparks, Fort Gibson, Oklahoma, who says in commenting about her reunion: “It was a great accomplishment to have successfully executed such a large event, and it was so worth it. I think the greatest reward was the wonderful people I came to know and love. I made so many new friends out of previously unknown relatives, and it is a satisfying feeling.”