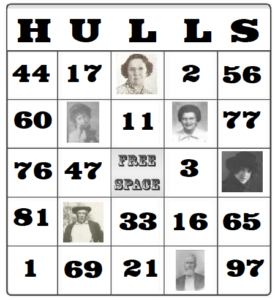 View all of the Hulls Bingo cards
(PDF format)

Here is a great way to teach and learn those little known family facts and trivia turn them into our very own Family Bingo game. We found a bingo card template on the internet and the fact that our family name substituted perfectly for the word “Bingo” across the top was a bonus. The squares are filled with numbers that have meaning, like 17 was the answer to the clue “Grandma was born in 19??, 21 may be the answer to the clue “the number of children great grandpa fathered.” Old Ancestor family photos were inserted into some squares as answers to simply calling out “Uncle Bob.” We made several cards shuffling the answers around and gave each player 3 cards at a time. Our local office supply store was able to print them on card stock very inexpensively. We gave every table an ample supply of those glass beads sold in the craft isle of the dollar store. The “caller” simply pulled slips of paper out of a hat that had pre-printed questions to the answers on the card. When someone covered all the squares in a row or diagonal they won a small door prize. We were set up to play 5 rounds, but everyone especially the younger crowd wanted to keep playing because they were learning so much family history. Be prepared for interruptions because when great – great grandpa James gets his picture covered up, the old-timers who knew him will have to tell a few sorties about him before they will let play resume. This is a great time and way to let go and have fun!

B-I-N-G-O!
Roxie Branch, Charlotte, North Carolina, shared these cards from BROWN FAMILY BINGO. Keeping with the theme “Brown Family Ties,” BROWN FAMILY BINGO was used as an ice breaker. Each person was given a BROWN card with a task or question in each square. The first five persons to have their cards signed by other members to create a BROWN BINGO were winners. Whoever signed the card had to know the answer or do the action. You could not sign your own card and only two signatures from the same person were allowed per card. It was a GREAT success! 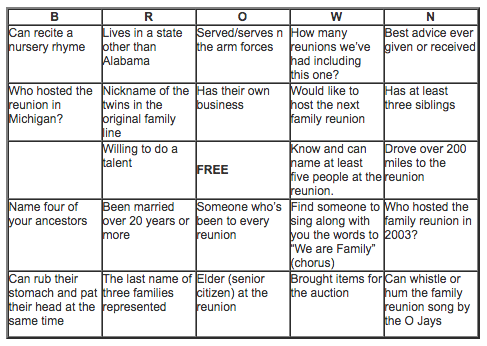 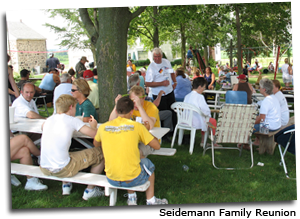 “Icebreaker” Bingo gets everyone talking and laughing in no time. You make the Bingo cards. Here’s how. Instead of numbers, your cards have words in boxes, such as “fisherman,” “marathons,” “drives an SUV,” “retired in Wisconsin,” “college student.” Then, everyone takes their Bingo card around the reunion and ask people to initial items that describe them. The first person to get a row of initials gets “bingo.”

Marianne Mersereau, Seattle, Washington, reported that during their Portland reunion, members of the Van Valkenburg Family Reunion got to know each other better through an adaptation of Bingo, called Vango. Everyone received a Vango card with the letters V-A-N-G-O at the top and a clue in each square. The object was to collect signatures of persons who matched the clues. For example, one clue was “Purple Heart Veteran,” so you had to find the family member who fit this description and get his signature on the card. Everyone completing a card received a Dutch-themed treat. The family was surprised and frequently amused by many revelations that resulted from the game!