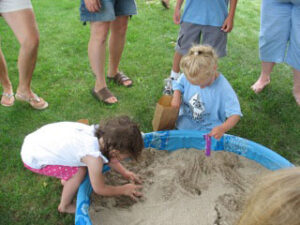 Bury wrapped candies and coins in sand for happy play.

Trash or Treasure is a hilarious game for adults and/or children, indoors or outdoors. It’s a variation of the old game of “White Elephant.”

There can be any number of players seated in a circle.

Most packages contain trash such as a rubber ducky and a mostly used bar of soap, a frayed shower cap and a comb with missing teeth, tacky old jewelry, empty peanut shells, an outgrown toy, a broken anything. Junky stuff. A few packages contain treasures: A movie pass, candy bar, tube of sun block, a CD, homemade cookies, a roll of nickels.

Joke packages contain Ex-Lax, itching powder, a popcorn tin with one package of microwave popcorn and a note to “pop your own” inside, a box of prunes and a roll of toilet tissue, a disposable razor and a band-aid, a rubber spider, a disposable diaper that has had a little weak tea poured inside, a small stuffed bunny and a handful of raisins. Comical stuff.

To play, stress the need to be fast and accurate. Have one pair of dice for every five or six players. Keep passing dice to the left. Players take turns trying to roll a six – not a combination of dots that add to six on both dice but six dots on one die. When they roll a six they may grab one package from the pile; double sixes let them grab two packages. Dice move around rapidly and before long more than one player is diving for the same package. Once all the presents are gone from the center, rolling a six allows them to steal packages from neighbors. The robbing is the favorite and funniest part of the game. Someone eventually calls a halt by loudly counting down from twenty.

At this point you choose an option: to end the game and save unopened packages for another game of Trash or Treasures to be played later or to postpone the game; those with the most packages can receive bubble gum or other trivial prizes. The second round is often more fun, beginning with jockeying for a different seat with new neighbors.

To end the game, packages are opened. One at a time for the most fun!

About the author
Patricia H. Anderson lives and writes in Nashville, Tennessee.