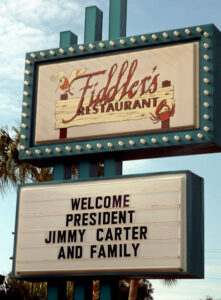 Former President Jimmy Carter is a reunion fan both for intimate affairs with his children and grandchildren (Reunions magazine, winter 1996, vol 6, no 2) but also, this year, plunging into a much larger affair. He wanted to commemorate the 200th anniversary of the birth of his great-great grandfather, Wiley Carter. There was already a database of 2,000 names going back 12 generations and an estimated 500 living descendants.

Carter had discovered some hair-raising stories about his ancestors. Wiley killed a man for stealing a slave while his son, Littleberry Walker Carter, Jimmy’s great-grandfather, was killed in a gunfight with a business partner over money from a carousel. President Carter reports, however, that most other relatives were law-abiding, peaceful individuals.

When planning began it was assumed about 250 family members would attend the reunion. The party in Plains grew to 800 including many descendants of Wiley who until recently had no idea they were related to the former president. Carter recalls calling one cousin in North Carolina who hung up on him saying it was only someone playing a practical joke. He was finally able to convince her. The reunion doubled the population of the Sumter County, Georgia, town for one day.

Organized by cousin Betty Pope, the reunion assembled at Plains High School, now a visitor’s center, then traveled to a gymnasium at Georgia Southwestern State University in nearby Americus for fellowship and story telling. Finally everyone celebrated at a barbecue and dance at Tanyard Hill Farm, home of Carter cousin, Gatewood Dudley.

from AP, Atlanta Journal-Constitution and Valdosta Daily Times with thanks to The Carter Presidential Center